How Acting Found Me

Ten years ago (2008), I became an actor.  I did not seek it out.  It was not something I had dreamed of doing my entire life.  Being the center of attention or in any spotlight was never a comfortable place for me.  So how in the world did I fall into acting?  Acting was an idea I had for my son as a positive outlet for all his energy. 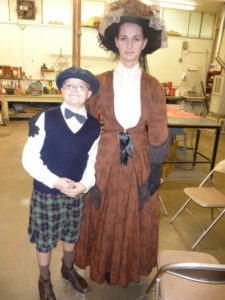 My son & I as “Victorian Mother & Son” in a short film highlighting the evolution of travel over the centuries in the US. It was used in a museum exhibit.

My son never really took to sports.  He LOVED being the center of attention and was not afraid to be silly in front of anyone.  He is that kid you see in restaurants that do the big display on his birthday and he is loving it!  I would be the one trying to not let him see me slinking into the corner of the booth.  He took to acting like a fish to water.  It was such a natural thing for him.

It was his acting coach at the time who suggested I give it a try.  I thought he was crazy!  I was in my early 30s…too old to start an acting career…or so I thought.  Aside from my age, an acting career just wasn’t conducive to my being a single parent.  Right?

Well, I wanted to be as supportive of my kids as I could be.  I discussed it with them to see how they felt about the idea.  I had always been incredibly introverted.  Acting was a great way to change that.  My kids loved the idea.  So, it became a bit of a family affair for a couple of years.

I fell in love with acting.  I went from being incredibly introverted (and still am by nature) to being able to say hello to perfect strangers.  Not only can I say hello, I can hold a pretty confident conversation.  Being in front of crowds is still a bit scary for me, but once I’m in character and rolling, I don’t even know the crowd is there.  Therefore, I have become an extroverted introvert.

Me, in character, as an awkward school hall monitor.

Films and commercials are my preferred medium.  There is no need to memorize an entire script from cover to cover.  Only scenes shot on that day are necessary.  I also love getting to take in all the behind-the-scenes work happening to create a film or commercial.  I watch it all!

Acting has helped me be a better people-person.  It has brought me out of my shell.  I can go anywhere in public, alone, and not continuously wipe my sweaty palms on my thighs.  People laughing at me brings me joy when my purpose is to make them laugh.  I can even laugh at myself and not take life so seriously.

Acting is one of the things I’ve done in my life that I would have given into fear before surviving cancer.  Something about facing a real life or death situation makes you take stock of your life, move past your fears, and live unapologetically.  My kids were also my inspiration.  Them growing up being afraid to take risks and create experiences was not an option for me.  I was their role model.  I had to show them it could be done.  Consequently, acting became not only a passion in my life but a positive parenting tool and means by which I inspire others to live their dreams.

5 Things I Wish I Knew When I Became an Actor